Crocodilians are an ancient group of animals that arose during the late Cretaceous period about 85 million years ago. They are one of the oldest surviving groups of animals from the reptile era and belong to the same subclass as the dinosaurs and birds. From the fossil record it appears that crocodi 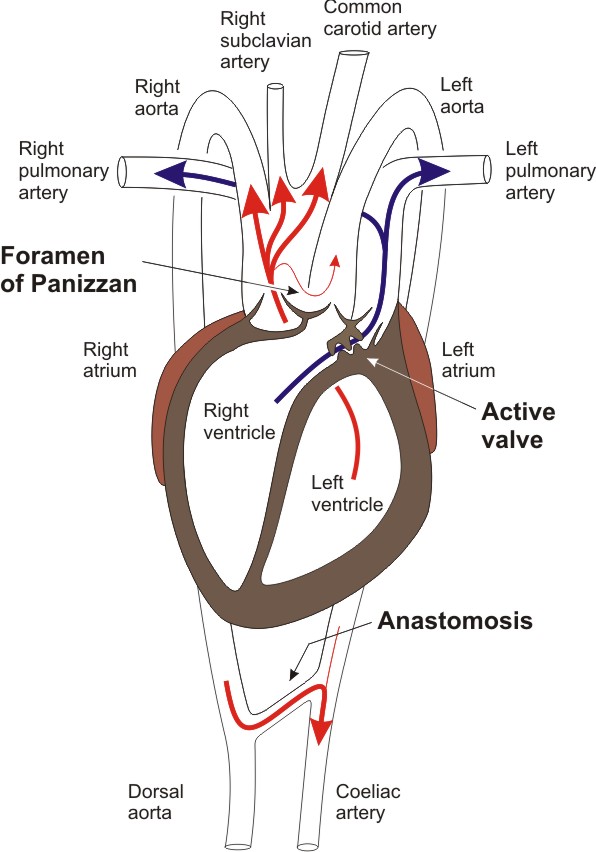 lians are more or less unchanged from about 70 million years ago, and some believe that they are the only real “prehistoric animals” that are still living today.
Unlike any other living reptiles that have a three chambered heart with two atria and one undivided ventricle, crocodilians have a fully divided four chambered heart similar to the anatomy of the bird and mammalian heart.
Crocodiles have retained two aortic arches, the right aorta that originates from the left ventricle corresponding to the aorta in birds and the left aorta that is connected to the right ventricle together with the pulmonary arteries. There are two points of communication between the aortas, one immediately outside the aortic valves called the Foramen of Panizza, described by an Italian scientist in 1833. The second communication point is found further down in the abdomen, where the left aorta joins with right aorta and is called the “anastomosis”.
In the right ventricle there is another unique structure only found in crocodilians that is called the cog-teeth valve and acts as an extra valve between the right ventricle and the pulmonary circulation. This valve system is not only unique in its presence but it is also the only known actively controlled heart valve. This valve makes it possible for crocodilians to actively close the lung circulation and redirect the blood in the right ventricle into the left aorta and back into the body.

”Crocodiles have the most complex cardiovascular system among the vertebrates

With its unique design, it is believed that the crocodilian heart can function as a four chambered heart where the pressure and the flow is completely separated as in birds and mammals but has the ability to redirect the blood away from the lung circulation as needed.

In three chambered hearts found in other reptiles, blood is pumped from the undivided ventricle to both the lungs (pulmonary circulation) and the rest of the body (systemic circulation). Both circuits are connected in parallel and this makes it possible to distribute the blood pumped from the heart unevenly between the pulmonary and systemic circulation. Given this cardiac anatomy, animals with a three chambered heart are able to reduce or even stop the flow to the lungs and yet maintain or even increase blood flow to the systemic circulation. This is believed to be useful in situations when the lungs have no function, such as when the animals dive and hold their breath under water. The disadvantage of this system however is that a single chamber cannot generate different blood pressures in the two circuits.

The four chambered heart in crocodilians, birds and mammals has two independent circuits which instead are connected in series. The left and right ventricle pumps the same volume of blood per unit of time. An advantage of the four chambered heart is that the pressures generated by the two ventricles can be different. The pressure in the pulmonary circulation should not be too high since it is vulnerable to edema formation in the delicate vessels of lungs while it is advantageous to be able to have a higher driving pressure in the systemic circulation in order to be able to increase flow rate and thus oxygen delivery and a high metabolic rate 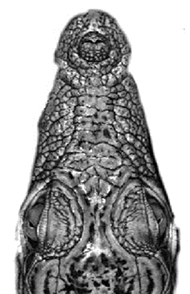 nto the body) instead of being pumped into the pulmonary circulation. This shunting can be observed in resting calm animals while in active animals the heart works as in birds and mammals. It is still unclear when and why the crocodiles use this unique capacity to switch from a fully separated circulation to a shunting condition. Several hypotheses have been put forward but it is hard to study this in a laboratory environment since it does not allow the animals to express their natural behavior due to stress induced by the environment itself. Furthermore, traditional methods used to monitor cardiac function (blood flow and pressure) requires a physical connection to the instrumentation and restricts movement and more natural behaviours (Axelsson & Franklin, 2011).

In order to gain insight into this unique cardiovascular system and its function and regulation, a new telemetric-based measuring system was developed. This remote monitoring system will allow us to record Doppler blood flow velocity and blood pressure as well as heart rate and body temperature in free ranging animals in their natural environment. This system has been tested and verified in instrumented, but still caged animals (Axelsson et al 2007), and it is now going to be used for the first time to record cardiovascular dynamics from fully undisturbed animals in their natural environment

The project name is SWEDEcroc and the plan is to start the experimental part in late November 2013 and finish the field recording mid-January 2014. The team consists of selected experts from Sweden, Denmark, USA and Australia. Each member of the team was selected carefully for their respective skills and to ensure a successful project.
We will instrument five large (2 meter long) Nile crocodiles with a biotelemetric unit that will transmit and record Doppler blood flow velocity, blood pressure, heart rate and body temperature. In addition each animal will be equipped with a time-depth recorder in order to record diving behaviours and a VHF transmitter for tracking purposes. The entire area will also be covered by four state of the art IR surveillance cameras that will record 24/7 in order to be able to correlate behavior with the physiology.
We will use the excellent facility at Wildlife Assignments International (http://www.wildlifea.com/) for the initial part of the project and then transfer the instrumented animals to a large waterhole at the nearby Mongena Game lodge (http://www.mongena.co.za/) for the long term recording. The animals will be fed but otherwise there will be minimal human interference. It is expected that after an initial recovery period the animals will display normal behaviours that will include diving bouts, feeding and basking on the banks of the waterhole and that we will finally get answers to the many questions about the functional significance of the complex cardiovascular system of crocodilians.

We worked at Wildlife Assignments
We stayed at Mongena game lodge