The aim of this project is to design and build a set of real laboratory exercises that students can operate remotely and interactively simply by using a computer connected to the Internet without any special software. This allows the students to collect real data without the need to be present in the laboratory. They have full control of the labequipment via the internet. This gives the students access to the equipment itself (ON LINE HANDS) it allows them top see the experiment in real time (ON LINES YES) and it allows them to communicate within the group and with the teacher (ON LINE COMMUNICATION)

Two labmodules have been developed; a short description of each is given below 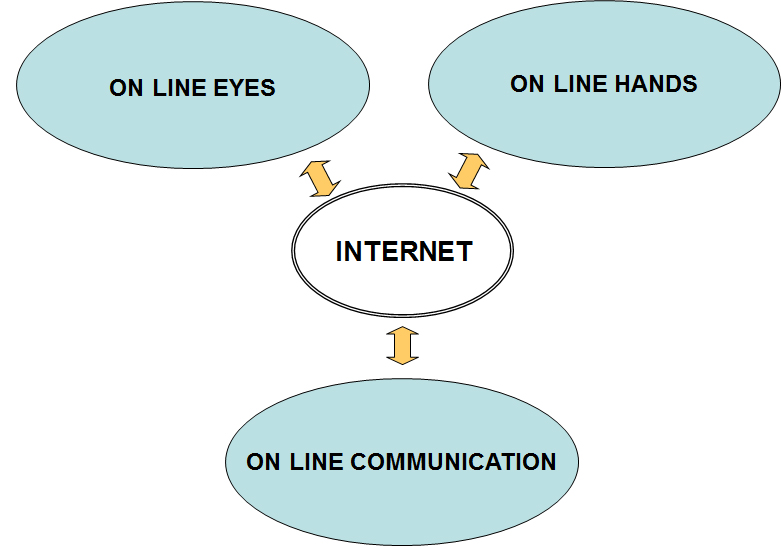 ON LINE EYES is based on a powerful WEB-camera (Axis 2130-PTZ, AXIS Communication Inc) so that students will be able to visualize the experimental setup and see the equipment and the experiment live. The camera has zoom, pan and tilt function and is viewed and controlled via a normal WEB-browser (http://130.241.175.79/)

ON LINE HANDS consist of a multiplatform client-server solution based on a computer connected to the equipment and at the same time acting as a web server, allowing students to control the equipment from their own computer via standard web browsers

Description of the two labmodules

A constant and permanent transfer of molecules and energy (heat) is taking place between organisms and their environment. Life depends on such exchange of energy and mass in the form of gases (oxygen and carbon dioxide), ions (protons, cations like sodium, potassium and calcium or anions like chloride and bicarbonate)
Mass transfer occurs by molecular diffusion while heat transfer occurs by conduction, convection and radiation.
The flow of either mass or heat depends on the properties of the media where exchange is taking place, the difference in temperature or concentration and the distance. Because of this, mass and thermal exchange between an animal and its environment will always occur, and this constitutes an important selection pressure towards the appearance of specialized exchange structures designed to avoid or improve the exchange of heat or molecules with the environment.
The following are examples of exchange structures designed to avoid loss of heat or molecules:

The following are examples of exchange structures designed to facilitate heat or mass transfer:

The purpose of this laboratory is to study the basic function of a countercurrent exchanger and to compare it with its alternative arrangement: the concurrent exchanger.

Below is a schematic drawing of the setup with numbers that will be referred to in the text. Thermostated baths (1) are used to set the different temperatures; in this case one bath is set to 5°C and the other to 37°C. Two peristaltic pumps (2) are used to pump water
from the two baths through the heat-exchanger model (3, se below for more details). The temperature in the exchanger is measured by at 4 locations along each of the two tubes in the heat exchanger model. The temperature is measure by an interface box (4) and the
information is entered into a computer (6). The computer control the two pumps via a control box (5) and also sends an alarm signal to an external alarm box (7) every time a person logs on via the web as a notification for the responsible teacher or PhD student.

The exchanger model (see below) consists of two 1 meter long copper tubes that are soldered together. In each tube 4 thermocouples are inserted to monitor the temperature
along each tube using a 8-channel thermocoupler interface that is connected to the PC. The computer records the temperature along the exchanger and controls the two peristaltic pumps. Data can be saved by the students and downloaded over the internet.

The interface that the students see in their web-browser (see ONLINE LAB picture above) includes the interface of the Labview program, a link to the web-camera and a link to the Adobe Connect Pro room that will be used by the students and teachers during the lab exercise if they are not at the same location all of them. The
Labview interface  is simple and students can access the control for the two pumps (Pump settings) and start and stop saving data (Save data). They can also see who is currently logged on (Logg). The temperature data is shown in two different ways, default is the
“Time diagram” with temperature for each pair of thermocouplers shown against time, the alternative is what is called “Temperature diagram” where the temperature is shown in a schematic representation of the exchanger.

One type of lab exercise that is used extensively in campus-based courses with good results is respiration experiments on various animals. These experiments can use virtually any animal but most common are small animals as mouse, frogs, and different fish species. The experiments are non-invasive and no harm is done to the animal that can be released afterwards. The experimental setup do not have to be very complicated but can still give results that will increase the students understanding of respiration and different factors that have effects on the utilization of oxygen.
There are basically two different techniques that can be used, open flow-trough respirometry and closed respirometry, both have their own pro and cons but for a student lab exercise the closed respirometry system needs less equipment and it is easy to understand the principle. Basically it consists of an air/water tight chamber with an oxygenprobe that continuously record oxygen tension in the chamber. The animal is placed in the chamber and water or air depending on the type of animal is pumped through the chamber, the air/water flow is then stopped and the decrease in oxygen tension in the chamber over time is recorded until an approximately 10% decrease in oxygen is reach, the air/water flow is then started again and the cycle can be repeated.

In this labexercise the students will be able to record oxygen consumption, heart rate and ventilation from a rainbow trout. They will be able to control the temperature of the setup and to run the stop flow respirometer.

A schematic figure of the setup is shown below. 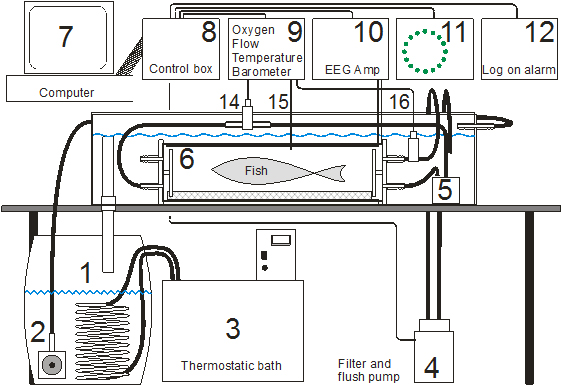 The water in the setup is recirculated via a pump (2) from a barrel (1) with a cooling coil connected to a thermostatic bath (3) and in series with a filter (4) that also serves as the flush pump for the respirations chamber (6). A mixing pump (5) is connected to the respispirometer with an in line oxygen probe (14) and an flow meter (16) both these are connected to a oxygen/flowmeter (9) that is in turn connected to a computer (7). The control box (8) is connected to the computer and controls the flush pump and the thermostat for the water temperature. An EEG amplifier (10) is used to pick up the biosignals from the water via two electrodes and the ECG and ventilation signals re filtered out and heart  and ventilation is calculated by the computer. Number 11 is an indicator for the respirometer to show when it is open (red cross) and when it is open (green circle), 12 is a indicator for when new participants log.